Master the Art of Conversation

Its major goal is to bring the advantages of Web-based development and content delivery to interactive voice response applications.

What is Conversation Management?

Conversation management enables you to:

Chant VoiceXMLKit is comprised of classes and tools for creating, validating, and interpreting VoiceXML. VoiceXML applications can be developed and tested offline before deploying to servers.

It is an application development framework for managing conversations with VoiceXML. Applications now have the ability to dynamically generate VoiceXML at runtime.

VoiceXMLKit includes C++, C++Builder, Delphi, Java, and .NET Framework class library formats to support all your programming languages and sample projects for popular IDEs—such as the latest Visual Studio from Microsoft and RAD Studio from Embarcadero.

Applications can validate and interpret VoiceXML.

VoiceXMLKit encapsulates all of the technologies necessary to make the process of validating and interpreting VoiceXML simple and efficient.

Instantiate VoiceXMLKit to validate or run VoiceXML within your application and destroy VoiceXMLKit to release its resources when conversation management is no longer needed.

Chant VoiceXMLKit is comprised of software classes and tools for managing conversations.

You may explore the capabilities of Chant VoiceXMLKit for 30 days. To continue to use the product after 30 days, you must purchase a license for the software or stop using the software and remove it from your system.

The Chant VoiceXMLKit license is a single end-user license. Each devleoper who installs and uses VoiceXMLKit to develop applications must have their own license.

VoiceXMLKit class library names vary by platform: Windows 32-bit and 64-bit. This helps ensure the correct library is deployed with your application.

You may purchase a license for Chant VoiceXMLKit on-line at the Chant store or through your preferred software reseller. 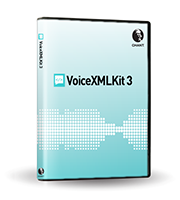 Order Chant VoiceXMLKit online at the Chant store or through your preferred software reseller.